Combustion and plasma are both reactive gas mixtures that are made of the same molecules, atoms, and charged particles, but in completely different proportions.

Advanced modes of combustion that are controlled by plasma discharges could become key components of the circular carbon economy.

Humans have a very long history with fire and, over the past two centuries, with more controlled forms of combustion. Our evolving mastery of combustion is marked by many technological leaps, but now, the overarching aim of the research field is to find ways to mitigate combustion’s main drawback—the carbon dioxide it generates.

“In prehistoric times, we learned to use fires for cooking, then fires to produce objects, and finally, since the 19th century, we learned how to use combustion for energy production and transportation,” says Deanna Lacoste, a researcher at the KAUST Clean Combustion Research Center (CCRC).

Lacoste is among a generation of researchers investigating the control of combustion for reducing emissions. “Our intensive use of combustion has a strong impact on our environment, and we need new strategies to suppress this impact,” Lacoste says. Research in Lacoste’s lab is focused on one such strategy: using plasmas to gain greater control over combustion events, minimizing pollutants, while maximizing the efficiency with which energy is extracted from the fuel.

The ultimate aim is that by boosting combustion efficiency, it will be possible to implement a circular carbon economy: the carbon emissions associated with energy production will be captured and sequestered or recycled to form a closed loop, rather than simply released into the air.

Deanna Lacoste is among a generation of researchers investigating the control of combustion for reducing emissions. © 2020 KAUST

The first is to mitigate growing energy demand by increasing energy conversion efficiency. The second strategy is to integrate renewable resources and short carbon cycle fuels, such as biofuels and fuels from waste, into the current grid. The third is to capture and store carbon dioxide. “At KAUST, we are actively working in these three areas.”

Lacoste’s plasma-assisted combustion studies fit into the strategy to reduce energy demand. A plasma is a highly electrically conductive gaseous mixture of ions and free electrons. “Combustion and plasma are both alike and different, depending on your focus,” Lacoste says. “They are both reactive gas mixtures, unsteady, volatile, evanescent and powerful. They are made of the same species: same molecules, same atoms and same charged particles, but in completely different proportions.” It is the balance of similarities and differences that makes it possible to enhance combustion using plasma possible. For example, by using an electric discharge to generate a plasma in the combustion chamber, researchers can manipulate the chemical composition of the combustion mixture at different parts of the flame, controlling combustion instabilities in certain lean-mix flames1. In theory, this mode of plasma-assisted combustion has the potential to boost efficiency in gas turbines. But until recently, the experiments had all been performed at atmospheric pressure (approximately 1 bar), whereas gas turbines, machines that extract energy from a moving liquid or gas and convert it into useful work, operate at pressures of between 5 and 40 bar.

Lacoste and her colleagues at the CCRC recently conducted some of the first high-pressure experiments of plasma-assisted combustion with promising results2. They showed that weak plasmas, which are inefficient at atmospheric pressure, become extremely efficient for combustion enhancement at high pressure. “This is new and promising for industrial applications,” she says. The team also showed that the plasma discharges they were generating in a flammable environment cannot be predicted by the standard electrical discharge theory, which opens new research possibilities in plasma physics. 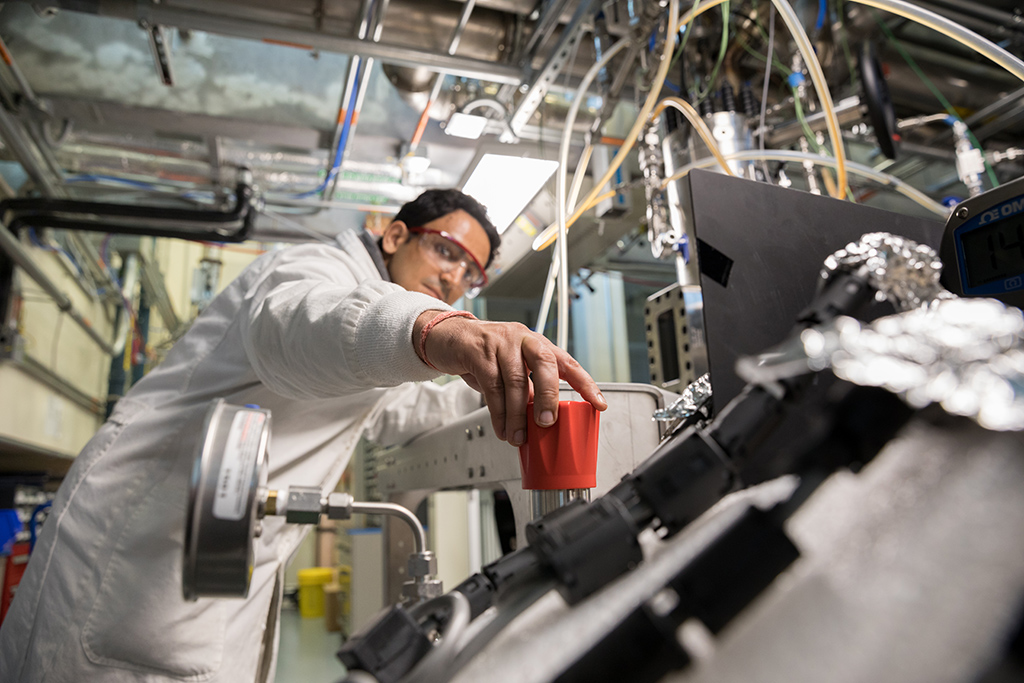 A postdoc in Deanna Lacoste's group Amit Katoch adjusts the flow of nitrogen into the system.© 2020 KAUST

Plasmas could also be the key to mastering entirely new modes of combustion, which are a hot topic in research because of potential efficiency gains. “The two most popular combustion modes in research are currently flameless combustion and detonation,” Lacoste says. The former operates at much lower temperatures than conventional combustion, whereas the latter is much hotter and faster. “Theoretically, both promise more efficient systems, based on theoretical studies and lab-scale experiments,” Lacoste says. “Their integration with industrial devices is challenging, but by coupling them with nonequilibrium plasmas, we could change the energy economy.”

Lacoste’s work on high-pressure plasma-assisted combustion has great promise for improving gas turbine performance in the near future. “Research is ongoing, with several promising concepts that I hope will be implemented in commercial devices in the near future,” Lacoste says.

"And there's more to combustion than carbon," Lacoste adds. “Recently, we started work in controlling the combustion of carbon-free fuels. The combustion and plasma of these mixtures are completely different—this is an exciting new area for us,” she says.