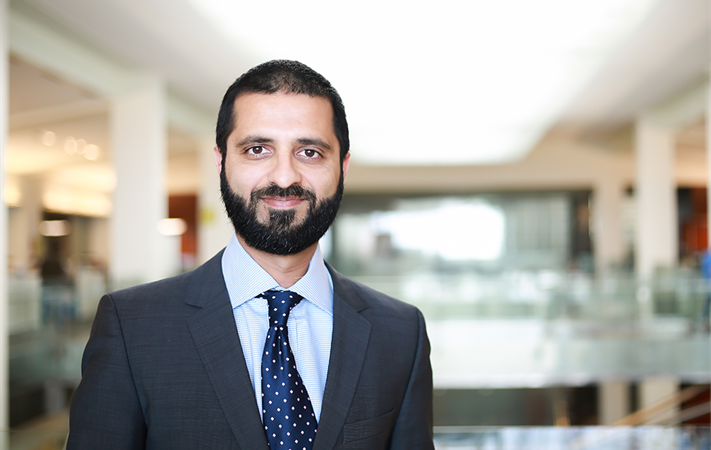 Aamir Farooq, KAUST associate professor of mechanical engineering, has been named as a co-recipient of the 2019 Hiroshi Tsuji Early Career Researcher Award. He will receive the award in 2020 at the 38th International Symposium on Combustion. Photo by Raheena Abdurehim.

KAUST Associate Professor of Mechanical Engineering Aamir Farooq has been selected as a co-recipient of the 2019 Hiroshi Tsuji Early Career Researcher Award. The award, co-sponsored by Elsevier and The Combustion Institute, recognizes early career researchers who have demonstrated excellence in fundamental or applied combustion science and have achieved a significant advancement in their field within four to 10 years of their doctoral degree.

The award is named after Professor Hiroshi Tsuji, "whose stable porous cylinder counterflow burner configuration influenced fundamental studies and applications in laminar and turbulent combustion," according to The Combustion Institute's website. The award will be formally presented at the 38th International Symposium on Combustion in Adelaide, Australia, in July 2020.

At KAUST, Farooq is a member of the Mechanical Engineering program and the Clean Combustion Research Center (CCRC) in the University's Physical Science and Engineering division. He joined KAUST in 2010 as an assistant professor and was promoted to the rank of associate professor in 2016.

The award recognizes Farooq's achievements in the study of fuel ignition chemistry that enable efficient use of fuels in the transportation and power generation sectors. His work helps to improve lives across Saudi Arabia and the world by curbing greenhouse gas emissions.

"Aamir Farooq epitomizes KAUST's policy to have talented young faculty and give all the means to scientifically succeed in the global arena," stated Yves Gnanou, KAUST distinguished professor of chemical science and acting vice president for academic affairs. "Congratulations on this major achievement."

Farooq obtained his bachelor's degree from GIK Institute of Engineering Sciences and Technology in Pakistan. He then earned his master's degree and Ph.D. in mechanical engineering from Stanford University.

"I am humbled, honored and thrilled to have been selected as the recipient of the 2019 Hiroshi Tsuji award," Farooq said. "This award is a testament [to] the contributions of a wide range of people in my life, from my family and friends to my teachers. I am indebted to KAUST for providing unmatched opportunities for research and for providing an environment where I can pursue my dreams by working with colleagues in CCRC and [with] the Fuel Technology Team from Saudi Aramco. I am especially grateful to my research group for their hard work and intensive dedication to realizing our shared goals."