CCRC’s contribution to the G20

CCRC’s contribution to the G20 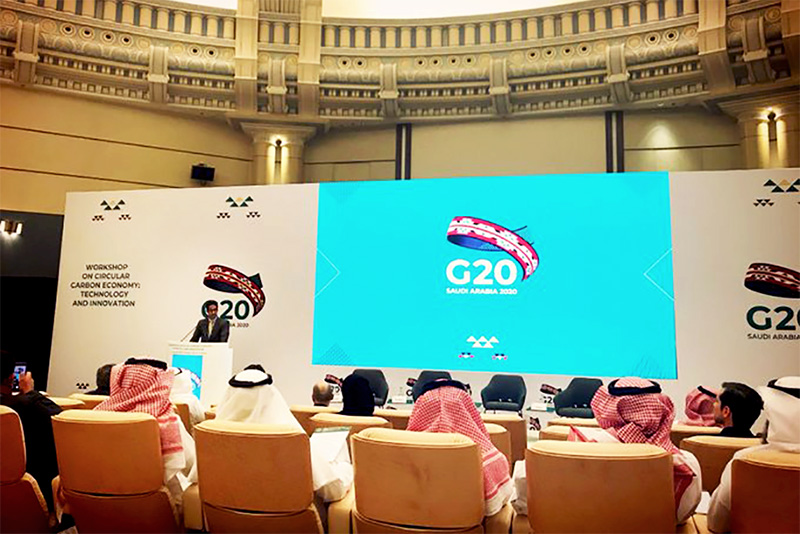 The G20 is the international forum that brings together the world’s major economies. The forum has met every year since 1999 and includes, since 2008, a yearly Summit, with the participation of the respective Heads of State and Government. The year-long presidency of the G20 rotates between its member countries. The presidency plays a leading role in setting the agenda and organizing the Leaders’ Summit, which is attended by the G20 Heads of State or Government. At the summit, the leaders issue a declaration based on policy discussions held throughout the year.​​​​​​ ​

Each G20 Presidency develops a theme that is central to the international discussions. The 2020 G20 Presidency under the Kingdom of Saudi Arabia focused its discussions, forums, working groups, and ministerial meetings under the theme of Realizing Opportunities of the 21st Century for All.

KAUST's contribution to the G20

KAUST's contributions to the G20 focused on one of the three main G20 aims, namely Safeguarding the Planet. Together with colleagues from around the globe, KAUST pursued concrete actions to safeguard the world's commons by participating in the Energy Sustainability and Climate Stewardship working groups. The working groups establish a dialogue between stakeholders such as the G20 member countries and different international organizations, as they complement the negotiations and ministerial meetings.

Faculty from the Clean Combustion Research Center (CCRC) made notable contributions toward the goals of the G20. In the run-up to the G20 Leaders' Summit of 2020, the Kingdom of Saudi Arabia hosted regular meetings with international experts in the field. The CCRC was mainly involved in two out of the seven priority areas for the Energy Sustainability and Climate Stewardship working groups; Cleaner Energy Systems for a New Era, and Holistic Approach to Sustainable Mobility. One of the outcomes of the G20 communique is the formation of the Circular Carbon Economy National Plan that Dr. William L. Roberts and Dr. Mani Sarathy of CCRC are a major part of.

"I am very grateful for the opportunity to work with the Saudi Ministry on the G20 Climate and Energy track, specifically in the Energy Sustainability Working Group. It has been fascinating to watch the various interests of the other G20 members come forth in these discussions. The Working Groups have been able to attract a wide range of participants, all of exceptionally high quality and depth. It is personally very motivating and rewarding to know I am playing a small part in the circular carbon economy solution for the kingdom." said Prof. William L. Roberts, priority area Co-Lead of Cleaner Energy Systems for a New Era, Director, CCRC.

"Working with international leaders and policymakers in the G20 was a rewarding experience. My role as co-lead of the Sustainable Mobility track in the Climate and Sustainability Working Group(CSWG) provided opportunities to carve pathways for clean fuels and efficient mobility solutions towards a sustainable low carbon future." Prof. S. Mani Sarathy, Co-Lead of Holistic Approach to Sustainable Mobility, Associate Director, CCRC