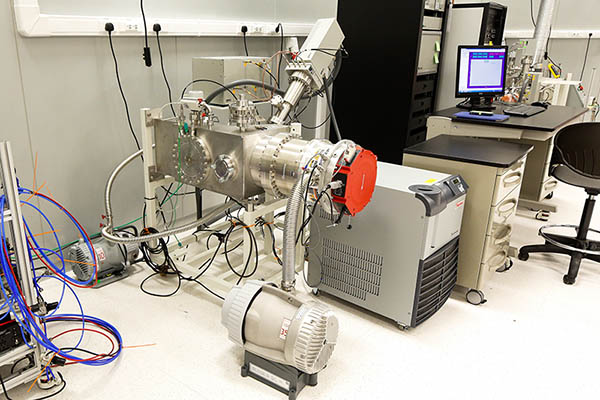 The system at CPC lab presently is connected to an Electron Impact Ionisation–Molecular Beam Mass Spectrometry (EI-MBMS) sampling system for identification and quantification of reactants, intermediates, and products. The sampling of the reactor contents is done by a quartz nozzle and a skimmer, which allows for the formation of a molecular beam. The beam prevents further reaction by rapidly expanding the gas stream through which intermolecular distances become greater than collision distances. This preserves the integrity of the molecules that are sampled and is especially required for short-lived species (e.g., radicals).

The sampled molecules are ionised by electrons generated with an electron gun whose energy and flux can be controlled. The ions are directed by optics to a Time of Flight (TOF) tube where they are separated by their mass to charge ratios. The resolution of the TOF in our setup is 3000-5000.

This research in KAUST runs complimentary with our collaboration with researchers from Sandia National Laboratory, UC Berkeley, Bielefeld University, CNRS Orleans, and Princeton University at the Advanced Light Source (ALS) in Lawrence Berkeley National Lab (LBNL). We also have collaborations with Shanghai Jiao Tong University with experiments conducted at the Hefei Light Source (HLS).  The experiments at the ALS and HLS are coupled to Photon Ionisation–Molecular Beam Mass Spectrometry (PI-MBMS). The synchrotron generates the vacuum ultra-violet photons used for ionisation. The tunability of the photon energy and high photon flux aids in separation of isomers, and avoids fragmentation via near threshold ionisation, which is not possible using EI-MBMS. This greatly helps in the detection and identification of crucial intermediates in low temperature oxidation.