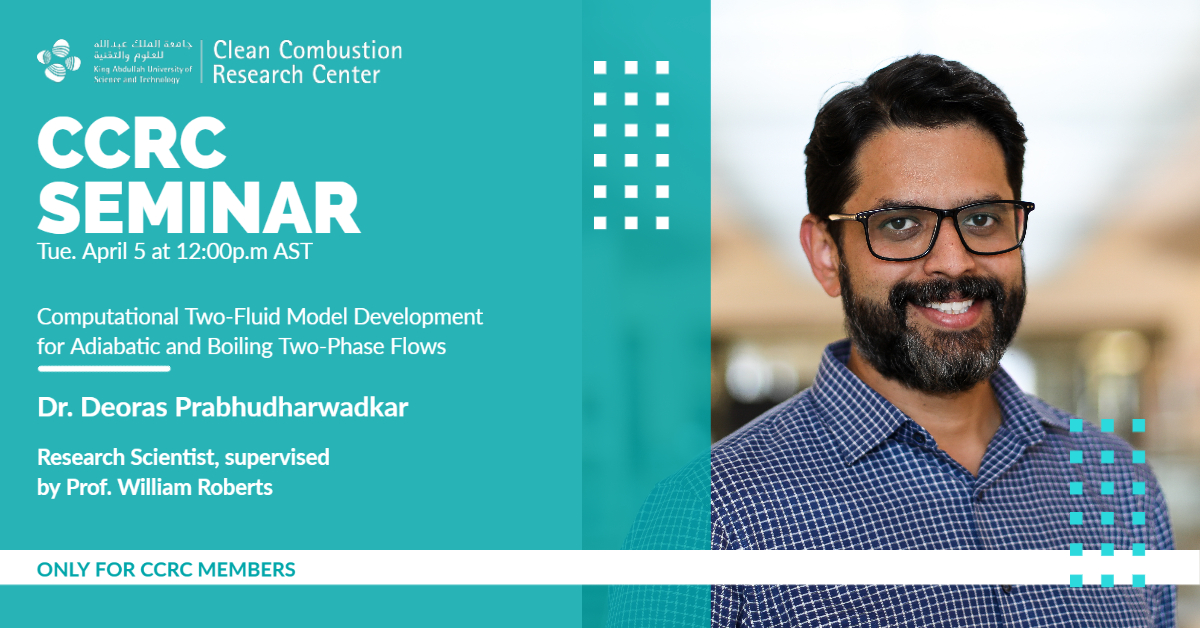 Abstract:  Accurate prediction of vapor fraction and temperature in the near wall region of a boiling surface is important to ensure safe operation of the equipment. Surface dryout or critical heat flux phenomena are detrimental in applications such as boiling water nuclear reactors (BWR). A two-fluid model, also known as the Eulerian model with interfacial transport and wall effects has the potential to predict different flow regimes and their transitions in the convective boiling flows. This model was developed and validated in two steps: 1) interfacial momentum transfer terms using adiabatic flow data, and 2) interfacial and wall heat transfer terms using boiling flow data. This development was done in collaboration with ANSYS and the models developed as a part of this research were later released as built-in models in the current version of the commercial code CFX.

Bio:  Dr. Deoras Prabhudharwadkar joined CCRC in January 2022 as a Research Scientist. He obtained his PhD in Mechanical Engineering from IIT Bombay (India) in 2008. He worked as a Postdoctoral fellow in the School of Nuclear Engineering at Purdue University until 2011 before joining General Electric Company, where he worked in Research, Lead and Senior Engineer roles for about 9 years. In GE, Deoras led research programs in gas turbine thermal management and waste heat recovery systems. He has two trade secrets, five granted (and five pending) patents and has authored over 30 peer reviewed publications. He was recipient of the Early Career Award and the Future of Energy Innovation Award in GE. At CCRC, Deoras works with Prof. William Roberts on Cryogenic Carbon Capture (CCC) and Ultrasonically Enhanced Oxidative Desulphurization (ODS) projects.

Title: Design of Stable Catalysts for Total Oxidation of Hydrocarbon and CO in Exhaust Gases Abstract: Research in the field of automotive exhaust catalysis has paralleled the broader growth in heterogeneous catalysis research, beginning in the 1960s, progressing through commercialization in the mid-1980s, and continuing today. The general trend has been one of increasingly complex catalyst formulations in response to increasingly stringent emission standards. The efficiency of ideal emission control systems is usually assessed by the conversion ability of exhaust components and their cost effectiveness. Since the development of fuel-saving technology (such as lean burn, turbocharging, and advance combustion), which result in lower exhaust gas temperatures than traditional engines, thus posing threat to performance of emission control systems. The strict updated mission regulations, and barriers associated with reactant inhibiting catalytic sites at low temperatures, alluded to as self-poisoning, result in suboptimal catalytic efficiency, constitute several challenges. This emphasizes the significance of improving catalysts for treating low temperature combustion (LTC) engine exhaust.  We are developing catalysts for hydrocarbon oxidation, specifically requiring very high temperatures like methane and propane, over palladium oxide (PdO) and Pt-PtO surfaces. The effect of carbon monoxide is investigated experimentally in the presence of water. The oxidation rate is determined for each reactant at atmospheric pressure in the temperature range of 35–700 oC. The effects of the total content of Pd+Pt, the weight-% ratio of Pd to Pt, and the oxygen concentration on the light-off temperature for the complete oxidation of CH4, C2H4, C3H8, and CO were studied. The weight percentage ratio of Pd to Pt was varied in the range from 0: 100 to 100:0. The light-off temperature had a minimum at a Pd: Pt mol% ratio of 70: 30 or higher Pd and decreased with increasing total metal concentration. Properties of Catalysts are studied in more detail with techniques like XRD, BET, CO chemisorption, ICP-OES, and TEM.

Bio: Hassnain A. Khan obtained his MS, PhD degree in Clean Energy and Chemical Engineering from Korea Institute of Science and Technology (KIST) South Korea, in 2019. His PhD work highlighted the Design of Catalytic systems for the water-splitting cycle to produce hydrogen and catalytic dehydrogenation of alkane into alkene, which are the basic building blocks of petrochemicals. He joined CCRC in February 2019 as a Post-doc fellow, in the group of Prof. Aamir Farooq. Hassanin’s current interests include experimental studies on exhaust after-treatment systems. He is focusing on developing photocatalysts for hydrogen production besides thermo-catalytic applications.