Abstract:  Residual fuel oils are receiving increasing attention from the power generation sector and chemical industry. Gasification is an approach for converting large complex hydrocarbons to syngas, a mixture of carbon monoxide (CO) and hydrogen (H2). Syngas can be purified and converted to H2 as a clean zero-emission fuel. Detailed chemical kinetic mechanisms are needed to simulate the gasification process for the purposes of design and development. Simulations, such as computational fluid dynamics (CFD), provide a promising approach for developing complicated processes such as internal combustion and heavy oil gasification. Petroleum-based fuels contain tens to thousands of components. The complexity of these fuels increases as moving from lighter (natural gas) to heavier (residual fuel oils such as vacuum residual oil (VRO)) hydrocarbons. Including all the components of a fuel in a detailed chemical kinetic model is very challenging. Also, fundamental data such as rate constants, reaction paths and thermodynamic parameters are still not available for many of these components. Therefore, a simple surrogate with a minimum number of components can be proposed to solve such a challenge. The surrogate is formulated by matching the functional groups and some critical characteristics of the fuels, such as average molecular weight and H/C ratio. For detailed chemical kinetic development of such a complicated fuel, a combination of functional groups for mechanism development (FGMech) and hybrid chemistry (HyChem) methodology was used. The kinetics of the thermal pyrolysis of the fuel is modeled using lumped kinetic parameters extracted from experiments and FGMech approach, whereas the oxidation of the pyrolysis products is described by their detailed chemical models.

Bio:  Mohammed AlAbbad is a research scientist at King Abdullah University of Science and Technology (KAUST). His current research focuses on reactivity and thermal analysis of heavy fuels and lighter hydrocarbons. He obtained his Master and Ph.D. degrees in mechanical engineering from KAUST. His doctoral research focused on studying the reactivity and ignition of petroleum-based fuels, surrogate fuels, and Biofuels. Before joining KAUST, He received his BS in Mechanical Engineering from Prince Mohammed University. 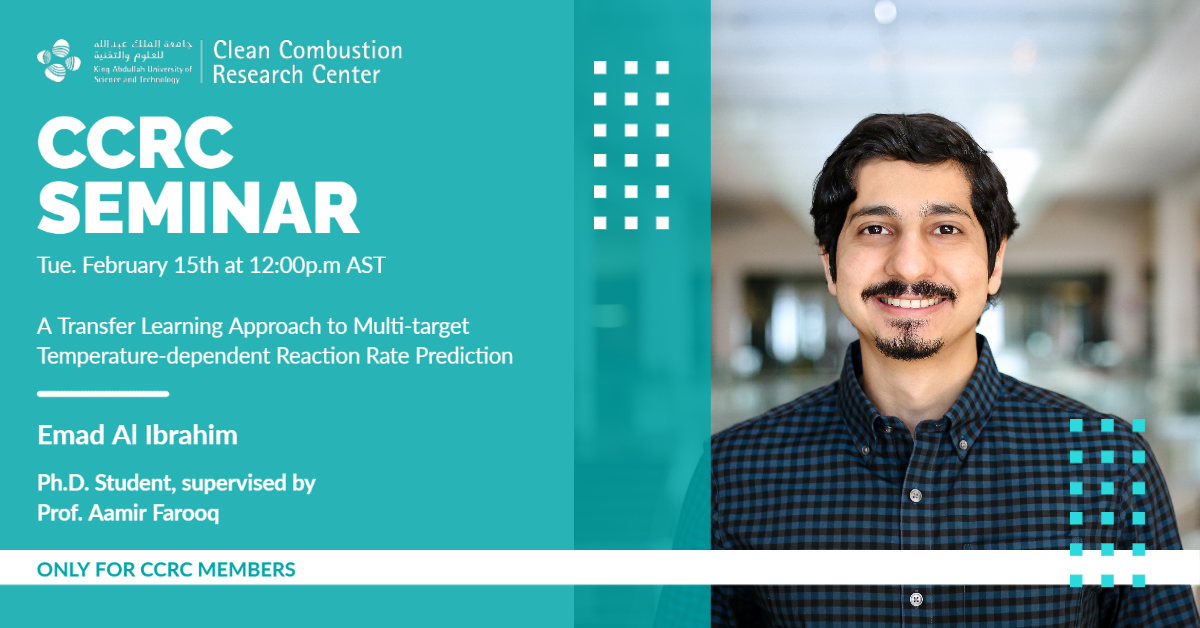 Abstract: Accurate prediction of temperature-dependent reaction rate constants of organic compounds is of great importance to both atmospheric chemistry and combustion science. Extensive work has been done on developing automated mechanism generation systems but the lack of quality reaction rate data remains a huge bottleneck in the application of highly detailed mechanisms. Machine learning prediction models have been recently adopted to alleviate the data gap in thermochemistry and have great potential to do the same for kinetic data with the recent release of quality reaction rate data compilations. The ultimate goal is to formulate easily accessible, general-purpose, temperature-dependent, and multi-target models for the prediction of reaction rates. To that end, we propose a model that depends on the well-known Morgan fingerprints as well as learned representations transferred from the QM9 dataset. We propose the use of an Arrhenius based loss where predictions of the three modified-Arrhenius parameters (A,n, and B = Ea/R) are given instead of the direct prediction of reaction rate constants. Our model is >35% more accurate compared to a baseline model of feed forward network (FFN) on Morgan fingerprints.

Bio: Emad received his bachelor's degree in Mechanical Engineering from the University of Washington in 2017. He then came to KAUST and earned a master's degree in 2018 where he mostly worked on computational fluid dynamics. He then gained some practical experience through internships at Aramco and Lucid Motors. He is now pursuing a PhD working with Prof. Farooq focusing on machine learning applications in spectroscopy and kinetics.