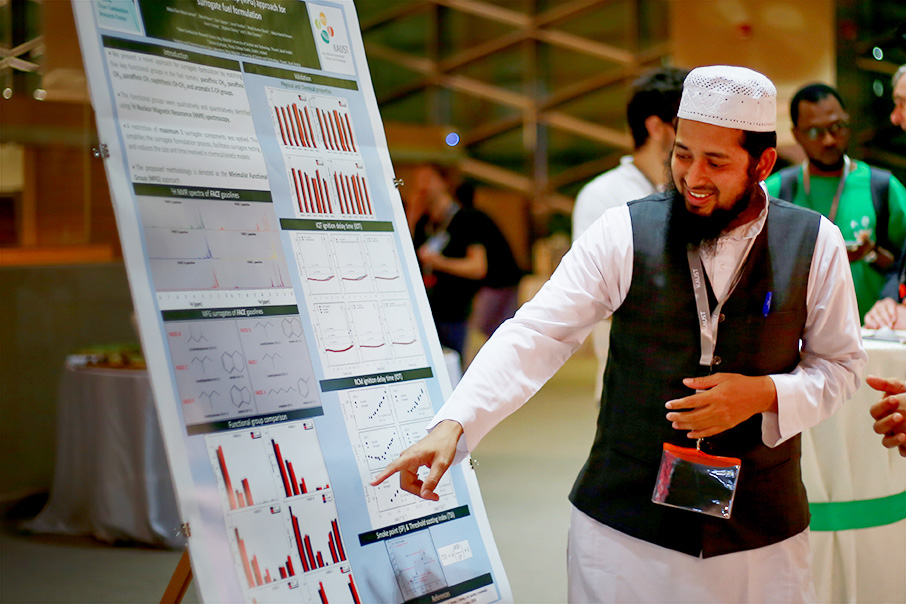 Abdul Gani Abdul Jameel, Ph.D. student, supervised by Prof. Mani Sarathy presented his Ph.D. dissertation titled 'A functional group approach for predicting fuel properties'. Abdul joined CCRC as a Ph.D. student in 2014 under the guidance of Prof. Mani Sarathy. His research interests are in lumped kinetic modeling of pyrolysis and combustion of low grade fuels such as heavy fuel oils, crude oils etc. which can be used for burning in power plants for electricity generation. These fuels are complex mixtures of thousands of molecules and it is of interest to understand the structural distribution of these molecules. Analytical techniques like Nuclear Magnetic Resonance (NMR), FT-ICR Mass spectrometry help in the characterization of these fuels and as a result a group of surrogate molecules that mimic the real fuel are developed. Accurate combustion modeling then helps in predicting and improving the efficiency of combustion.

A new approach for characterizing petroleum fuels called the functional group approach was developed by disassembling the innumerable fuel molecules into a finite number of molecular fragments or ‘functional groups’. This thesis proposes and tests the following hypothesis, Can a fuels functional groups be used to predict its combustion properties?  Analytical techniques like NMR spectroscopy that are ideally suited to identify and quantify the various functional groups present in the fuels was used. Branching index (BI), a new parameter that quantifies the degree and quality of branching in a molecule was defined. The proposed hypothesis was tested on three classes of fuels namely gasolines, diesel and heavy fuel oil.

The functional group approach was also extended to study heavy fuel oil (HFO), a viscous residual fuel that contains heteroatoms like S, N and O. It is used in ships as marine fuel and also in boilers for electricity generation. 1H NMR and 13C NMR measurements were made to analyze the average molecular parameters (AMP) of HFO molecules. The fuel was divided into 19 different functional groups and their concentrations were calculated from the AMP values. A surrogate molecule that represents the average structure of HFO was then formulated and its properties were predicted using QSPR approaches.